SportsTalk! Paddling making its way in the Bay 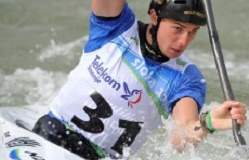 All eyes are on Rio this month, with four of the Bays home grown talent representing in Canoe Slalom.

Tauranga paddlers Mike Dawson and Luuka Jones will fly the kiwi flag while siblings Ella and Bryden Nicholas will represent their father’s homeland, the Cook Islands.

It hasn’t been all about Olympics over the last few months as the competition season in Europe featured three World Cups and the Junior and U23 World Champs in Poland.

Bay of Plenty was well represented across these teams, with some very encouraging performances from the Bay's younger athletes.

20-year-old Callum Gilbert, who has come through all the Bay of Plenty programmes, showed great consistency to make all three Senior World Cup semi-finals and the semi-final for the U23 World Championships, missing a final by less than two seconds.

In the U18 World Championships, Rotorua’s Okere Falls paddler Zack Mutton, who is still under 16 years of age, finished in the top 20, while Tauranga Boys College kayaker Callum Aitken at his first Junior World Championships performed very well to make the semi-finals.

Our top paddlers have traditionally started the sport at college age, very late compared to the Europeans who dominate the sport at all levels. This is changing now for the next generation, with new skills programmes designed for the younger athlete.

Entry level is via the Paddle Passport programme, which teaches basic canoeing skills in a kayak on flat water. Time on the white water comes later.

Competition designed for this age group is also modified to flat water and canoe slalom will make its debut in the AIMS Games next month in an event based on the format for the Youth Olympic Games.

Of course key to getting more kids paddling is having coaches. Coachforce Officer Aaron Osborne has continued to develop resources to help those interested get started in coaching. Some of these are online modules so are very achievable from anyone with any interest. To learn more check out www.canoeslalombop.co.nz.

Canoe Slalom in the Olympics takes place from the 7-11 August.