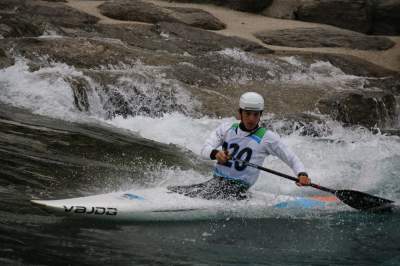 Term one is the end of our main canoe slalom season with many local, national and international events that our athletes have competed in.

The year started with the New Zealand selection races and Oceania Championships held in Mangahao (near Palmerston North) and WERO (Auckland), before several athletes headed to the Australian Open, held in Penrith, Sydney.

New Zealand Secondary Schools Champs were held in Wanaka on the Hawea River and Nationals were held in Tekapo over Easter, then a team headed to Barcelona for the Youth Olympics Qualifications.

Five paddlers went to Barcelona in April for the qualification event for the Youth Olympics which is being held in Buenos Aires in October. This events format is a combination of canoe sprint and canoe slalom, and Finn Anderson was the stand out success finishing second in the canoe slalom out of 50 paddlers. This placed him 17th overall (combined sprint and slalom times).

Our coaches have also been busy with all the New Zealand events and also recent appointments to NZ coaching positions. Pierre Labarelle has taken on the role of High Performance Coach for the Senior New Zealand team and heads to Europe with the team from mid-May to end of September.

Meanwhile, Matt McKnight has been coaching the Youth Olympics team and travelled to Barcelona with the team.

We farewelled our other coach Kaca Anton (nee Macova), as Kaca is heading off to travel overseas with her husband – we wish her all the best.