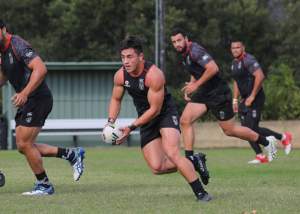 Upper Central Zone is one of seven Zones for New Zealand Rugby League and is one of the most geographically covered areas in New Zealand.

Districts include Gisborne, Waikato, Hauraki, Bay of Plenty and coastline. The purpose of the Zone is to lead, foster, develop and promote rugby league in our area.

At a district and club level, Mini/Mod, Youth and Senior footy are in full swing in Waikato, Bay of Plenty and coastline. Hauraki have also started their Mini/Mod season, with Gisborne starting in June. Taniwharau is currently leading the Senior Waikato competition, closely followed by last year’s Wai-Coa-Bay Champions: Hamilton City Tigers.

The Bay of Plenty/Coastline combined competition is going to be a closely-fought battle, with Otumoetai Eels currently unbeaten and the Pikiao Warriors is a team to watch out for this season!

The Zone is also rolling out some initiatives to help with grassroots footy. The ‘Be a Sport’ campaign, reinforcing positive side-line behaviour for our kids, and the Club Champion Programme kicks off this Wednesday in Tauranga.

The Zone is fortunate to have some major events coming to our region this year, including the Vodafone Warriors this Friday at the FMG Stadium, Hamilton. It will be intriguing to see the die-hard league fans come out of the woodwork from the area to support the Warriors and Coach Steven Kearney as the team takes on St George.

The Harvey Norman Community Warriors team and Upper Central Zone Staff will be travelling to schools to do some community work this Thursday and Friday, and League Clubs from Tauranga and Hamilton will see their U7 and U9 Grade teams playing in the curtain raiser matches among the Warriors hype – Otumoetai Eels from Coastline Rugby League District will be playing alongside Waikato District-based clubs Turangawaewae, Taniwharau and Hamilton City Tigers.

But the main event for rugby league this year is the Rugby League World Cup, which is coming to New Zealand in October. New Zealand, Australia and Papua New Guinea have won the rights to host the World Cup this year, and as such Hamilton’s FMG Stadium and H3 team will be hosting two home games: Tonga v Samoa on 4 November and NZ v Tonga on 11 November.

Other events coming to the Zone include the NZ Secondary School Qualifying Tournament, the North Island Districts Tournament, Youth Nationals and NZRL Junior 16s and 18s.