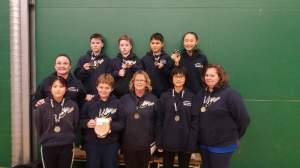 The badminton season is coming to an end for 2017, but it sure has been a productive one for the Bay of Plenty Badminton Association!

We saw again an increase in the number of kids playing in schools and clubs across the region, and the flow-on effect of this has been in increase in the number of young players participating in Bay of Plenty Year 7 and 8 tournaments. This year we ran qualifying tournaments in the EBOP, CBOP and WBOP, and the top teams came through to the BOP Finals.

There was also an increased numbers playing in the AIMS Games (178 participants in 2017 – the biggest number yet!)

But this was not limited to younger players, as we have also seen an increase in the number of teams entered into the BOP Secondary School Championships – at both the qualifying tournaments in the EBOP, CBOP and WBOP, and then an increased number of teams coming through to finals.

We also had teams go and compete in the New Zealand Secondary School Championships (John Paul College, Tauranga Boys’ College and Bethlehem College) with great success for all teams as they improved on their team placings from 2016.

Bay of Plenty had five Junior Representative teams this year – two Under 13, one Under 15, one Under 17 and one Under 19.

The region’s number-one Under 13 Team and also the Bay of Plenty Under 17 team won NZ Division 2 – awesome achievement for the players and great for our region!

We had the same number of teams attend NZ Junior Team Nationals in 2017 as the North Harbour region (only two regions had more teams than us, which were Manuwatu and Auckland).

The Bay of Plenty Badminton Association is now in the planning stage for the next season, and we are targeting bigger and better numbers in 2018.

We are also working hard working on developing a facility in Tauranga to cater for the growth in the sport. Bay of Plenty Badminton is working with Tauranga City Council under the new Bay of Plenty Spaces & Places Strategy to get a piece of land earmarked for a facility.

We have identified some potential partners (indoor bowls, Parafed and table tennis) and would like to develop a Sports Hub facility where each code has a specific area that meets their sporting needs, but we share common amenities such as bathrooms, changing rooms, kitchens and social spaces, storage and car parking.

We are hoping that both the Tauranga City Council and the community will support this project!