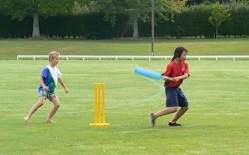 When I mention to people I work in cricket, the first thing they always ask is “what do you do during the winter?” Often it is easier to just say ‘planning’.

While the playing side of the sport might cease, behind the scenes the work continues.

Officials are an essential part of the sport yet often under resourced or overlooked when it comes to the application of funding and support. Our Umpire Training Officer will concentrate on recruitment, retention and development of officials across the region. As well as a recruitment drive, there will be a series of workshops held across the region as a way of encouraging people to get involved.

We are starting to see tangible returns from the investment made in increasing female participation. We are fortunate to receive support from Trillion Trust to fund our GoGirl program which teaches the fundamental skills of cricket to year 4-6 girls. We now have a mass of eager young females wanting to play on a regular basis, the key to capitalising on this surge of interest will be tailoring our competitions and formats to appeal to this demographic.

We are also seeing progress at intermediate and secondary school level with Tauranga Intermediate and Tauranga Girls College both off to National finals in November as the Northern Districts representatives in their respective competitions, not to mention the Bay of Plenty Secondary Girls side also winning the Northern Districts Secondary Girls tournament.

At the other end of the scale, the Bay of Plenty Senior Men have an exciting summer ahead as they set out to defend the Northern Districts Men’s One and Two Day trophies as well as the Hawke Cup.

Bay of Plenty again has good representation on the Northern Knights contracted player list with 7 of the 15 contracts awarded to Bay of Plenty players. Local Black Caps Kane Williamson and Trent Boult continue to be fantastic ambassadors for the sport on a national and regional scale. Their feats on the international stage continue to inspire the next generation of youngsters to pick up a bat and ball.