SportsTalk: Hockey leading the charge around the Bay 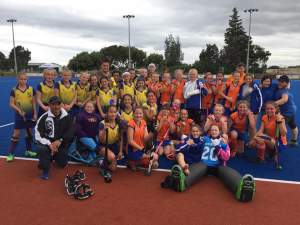 September and October are two very busy months for Tauranga and Bay of Plenty Hockey – with school tournaments, AIMS Games, Under 13 and Under 15 representative tournaments, our teams were all training to peak at the right time.

The beginning of September saw a majority of our local school 1st and some 2nd XI teams head away to the various National Secondary School Tournaments scattered around the country.

A few top results were the Taupo Nui-A-Tia 1st XI Boys winning the Founders Cup Tournament and Rotorua Boys High School 1st XI coming 2nd at the Mayhill Cup. This means both of these teams will join Tauranga Boys’ College (who placed eighth in 2017) in the Tier 1 and 2 Tournament (Rankin Cup and India Shield) next season.

With the term three holidays upon us, our Under 15 and Under 13 development teams head off to their national tournaments.

The Bay of Plenty Under 15 boys (Under 15 Premier Boys National Tournament, Nelson) and Under 13 development boys (McGrath Tournament, Rotorua) experienced success, with both teams placing second at their respective tournaments.

The Tauranga Under 13 development girls also experienced success at the McGrath tournament where they placed third equal with Waikato.

The second week saw Tauranga play host to the Collier Trophy, which is the National U13 Girls Tournament, while the Under 13 boys headed to Auckland. Once again, the Bay of Plenty boys shone, placing second in the Hatch Cup. To top off the week in Auckland, the Tauranga Hatch Cup supporters bought home the supporters trophy for the third consecutive year.

The other three Under 13 teams competing nationally also successfully fought their way to top eight finishes, which is an exciting prospect for the years to come.