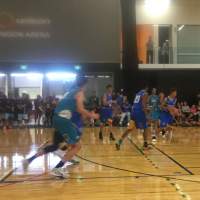 What a great start to the year for basketball in the Bay. More than 160 teams participated in the New Zealand Maori Nationals in Rotorua at the end of January, with Tauranga City Basketball represented by 11 teams under the Te Maru o Mauao ki Tauranga Moana banner.

All teams performed exceptional well with the Under 13 Girls winning a national title, and the Under 17 Boys and Open Women both finishing third.

The summer season also saw 3x3 events happening around the region and with numbers continuing to increase, these events are set to grow in popularity and scale.

Now, the representative programmes are underway, with the Bay of Plenty to be represented by 24 teams overall (including six from Rotorua) at the Mel Young Easter Basketball Classic in Tauranga next month.
As part of this development event, Hall of Fame US College Coach Jim Foster and former Sydney Kings Head Coach Damian Cotter will deliver coach and player education, and FIBA Referee Educator John Martin will lead the referee workshop.

Outside of the representative programme, the next major basketball event is the New Zealand Secondary School 3x3 National Slam from March 30 to April 1. Previously this event has been held in Auckland, so it is great to see growth in the sport happening and the event now coming to the Bay.

But with growth comes the need for some big changes. A new stadium and future plans for other facilities in Tauranga are a hot topic at present, however basketball facilities are not high on the agenda. The reality is that basketball has outgrown the city’s current amenities and as such Tauranga City Basketball has started discussions with Tauranga City Council on the provision of more space.

Pathways and possibilities for New Zealand’s basketballers continue to grow. Through the sport’s growth we are able to bring more opportunities here for our athletes and the wider community, including the economic benefits that come with hosting events in the Bay of Plenty.

I hope you get the opportunity to come and support the local sides playing here throughout the year.