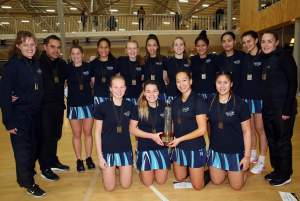 Age-group representative netball has been strong in the Netball Waikato Bay of Plenty (Netball WBOP) Zone this year, with the region well represented at both Netball New Zealand’s U17 and U19 Championships.

Netball WBOP was represented at the NNZ U19s by Trust Waikato Hamilton City and Harbourside Netball Centres, with Hamilton City walking away with the overall title, beating Manawatu 36 -31 in the final. Congratulations go to Amorangi Malesala, Sydney Fraser, Lisa Mather, and Lyanne Eukaliti, who all gave stand-out performances and were selected in the tournament team.

“I’m pretty thrilled with the effort they put out there today,” said Hamilton City coach Rebecca Gabel after the game.

“Manawatu were always going to be tough. I’m just really proud of my girls and the way they’ve come together this week. We’re a relatively new team and so to see them all come together in this way has been the real highlight.”

Harbourside performed well to break into the top 12, with a strong win in their final game over Auckland-based Howick Pakuranga, earning them a reputable 11th placing on the national table.

Hamilton City A, Eastern Waikato, Eastern Bay of Plenty and Harbourside all impressed, making top 16 playoffs and contesting finals places. All Netball WBOP teams showed grit and determination throughout the tournament, gaining crucial experience that is essential for player development.

For more information and to register visit www.sporty.co.nz/rotoruanetball