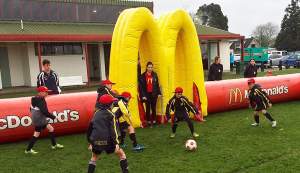 It’s been great to see the number of junior players in action during terms two and three around the region.

The weather has been a challenge, with facilities sometime struggling to cope with the amount of rain, but we’ve managed to get a majority of the scheduled games played.

We are now at the business end of the season with about a month left, which will then be followed by the knock-out competition finals and end-of-season tournaments across the region.

We’re hosting the McDonald’s Waikato Junior Five-a-Side Tournament on September 23 and 24 at Jansen Park, Hamilton, for 7th to 13th/14th grades. This event is open to teams from the Bay of Plenty, as well as the Waikato, with clubs and schools welcome to enter more than one team in each section.

We’re also running the inaugural McDonald’s Rotorua Junior Football Tournament at Puarenga Park, Rotorua, on Saturday September 30. This event spans 7th through to 12th grades in the normal age formats. Registration closes on August 23. More information for both these tournaments can be found at the website: www.waibopfootball.co.nz

Like many across the region, we’re already looking forward to the upcoming AIMS Games, which are held annually in Tauranga. The games run from September 11 to 15, and this year both football and futsal are being offered. WaiBOP is pleased to be centrally involved in the running of both these tournaments. We wish all of the region’s intermediate-aged players good luck at the event.

In early October our region hosts the annual Weir Rose Bowl tournament, which will see the top 12th grade boys and girls players from the Northern, Auckland and WaiBOP regions meet for three days of intense competition.

WaiBOP’s squads are made up of players who have been competing in this season’s First National WaiBOP Junior Under-12 league, which is a competition featuring club teams from the Bay of Plenty and Waikato. This year’s Weir Rose Bowl runs from October 7-9 at St Peter’s School, Cambridge.

With summer on its way we’ll soon be turning our attention to futsal, with various leagues running through to the end of the year and in early 2018. The senior men’s Loaded Futsal Premiership is already underway.

Keep an eye on the website for entry information about our other futsal leagues.