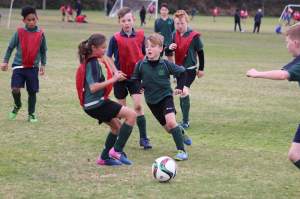 We’re at the end of another football season.

Most of the region’s players, coaches and volunteers will be taking a well-earned break over a summer period that will hopefully arrive soon.

During the recent school holidays the WaiBOP region hosted the Weir Rose Bowl tournament. This tournament, involving under-12 representative teams from New Zealand’s three northern-most Federations, is key in the talent development path. Congratulations to the Western BOP United side, coached by Nic Millichip, that finished runners-up in the boys tournament.

Congratulations also go to Katikati-based Millichip. Back in August he was named the McDonald’s Junior Coach of the Year and won a trip to the FIFA Club World Cup in Japan in December.

In the youth space we are now gearing up for the National Age Group tournament, which is held in December. This tournament will see WaiBOP take on the six other federations in boys and girls tournaments for 14, 15 and 16 year olds. Trials involving many BOP players have already been held and squads will be named soon.

Summer is when futsal, an indoor, small-sized version of football, gets into full swing. Futsal leagues and programmes for all ages are underway across the region, including in Tauranga, Rotorua and Whakatane.

In early October our region hosted its first ever National Futsal League fixtures at Rotorua’s Energy Events Centre. WaiBOP Futsal began our national league campaign with two wins over Hawke’s Bay. The team has more games in the coming weeks.

The Loaded WaiBOP National Women’s League team began their season on October 16 with a 2-2 draw against Capital Football. This league sees WaiBOP play teams from the other six Federations, with three home games and three away.

Home games this summer are being held at John Kerkhof Park in Cambridge. Each game is preceded by a Girls Only Football Festival for female players aged 4 to 14. We’d encourage females from the BOP to travel across, take part in a Festival and then watch the team. Entry is free.

Over the past twelve months WaiBOP has been growing the number and capability of the region’s goalkeeping coaches, led by former All White James Bannatyne. Continuing this we’ll be holding a one-day NZ Football Goalkeeping Level 1 course in Cambridge on November 5.