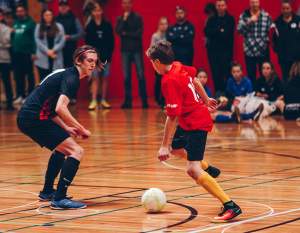 As we look forward to summer, it’s important to highlight the fact that football will continue at pace as we no longer have a winter sport/summer sport divide when it comes to football and futsal.

Across the Bay of Plenty and Waikato region, the area covered by our organisation, the next few months is primarily about futsal and representative football.

It’s fair to say that futsal, one of New Zealand’s fastest growing sports, is booming. Our term four junior, youth and senior leagues are underway and are more popular than ever. While this puts added strain on facilities, here in the Bay we are well served, particularly in the larger centres. It’s great to see everyone out on the futsal court.

Our Futsal National League team is sitting pretty after six games in the 2017 Futsal National League. The team has just returned from a busy weekend in Napier with a record of two wins and two draws, and now heads the standings in what is an incredibly tight competition. Led by Futsal White, Brayden Lissington, it’s great to have a team of such positive role models representing our region.

The Loaded WaiBOP Football Women’s team is now halfway through their 2017 National Women’s League campaign. This team, made up of players based at clubs from across the region, lost their first two games against Canterbury and Northern, before picking up a point following a draw against Southern United last Sunday.

In what’s looking like being a competitive race for the play-off spots, the team now has a bit of work to do to match their top three finish from 2016. But two of their remaining three games are at home so anything’s possible. The team hosts Capital on Sunday November 5 (at 1.30pm) and Central on Sunday November 19 (at 1pm). Home games are at John Kerkhof Park in Cambridge.

Looking a bit further ahead, we’re scheduled to host another NZ Football Junior Level 3 coaching award in Rotorua during February 2018. This five day course is aimed at coaches looking to provide a comprehensive programme for grassroots and talented footballers aged seven to 12 years.

Please contact Alec Wilson on alec.w@waibop.co.nz for more about this course or visit www.waibopfootball.co.nz/coaches for information on our coach education programme. A full list of courses for 2018 will be available early in the New Year.