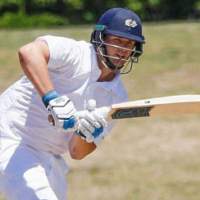 Taking up the role of CEO Bay of Plenty Cricket in November provided me with every opportunity to experience the full range of cricket matches in the Bay of Plenty this season.

In Women’s and Girl’s cricket, we held Northern Premier League matches, Rainbow World Cup matches and our own Junior NPL matches. These were preceded by great development opportunities for our younger players, which were organised by our Women’s Development Manager Rebecca Yee. It is certainly a great time to be a young female cricketer in the Bay.

Bay of Plenty Senior Men confirmed their supremacy among the Northern Districts by winning the Fergus Hickey Rosebowl and once again proved their high ranking among the New Zealand District Associations by repulsing the four challengers for the Hawke Cup: Counties Manukau, Hawke’s Bay, Nelson and Southland.

In addition, our Men’s Development Team won the Northern Districts Development title (Basil McBurney trophy), a real feather in the cap for our up and coming players.

Bangladesh played two wonderful T20 matches against the Black Caps in January, with patronage from the residents at an all-time high – crowd numbers were more than 17,000 for the two matches – and we hosted the White Ferns in early March when they competed against Australia for the Rose Bowl.

We have also held two first-class Plunket Shield matches (both over four days) during the season.

Club matches and age group matches provide great action and opportunity to all age groups, and the finals for many of these competitions will be held around the Bay, for example the Williams Cup final is due to be played at the Bay Oval, Mount Maunganui, at the end of March when the season draws to an end.

This high-quality international cricket, the important domestic matches and all the various girls’, boys’, women’s and men’s matches would not have happened without a well-disciplined and superbly organised team of cricket administrators and volunteers.

This is a big shout out to all concerned for a job well done. You really made all this happen - and from what I hear, the cricket will be even bigger and better next year!