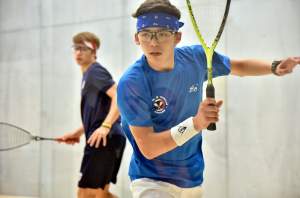 It’s only 15 days until the World Junior Squash Championships begin in Tauranga – and what an event it’s going to be!

Twenty-eight nations represented by 150 athletes will be vying for the Championship title. Never before have we seen this calibre of squash in our region and the excitement is building. The athletes are the top junior U19 players in the world, featuring European and Asian Champions, British Open Champions, Swiss Champions, various other national champions and world-ranked players.

Squash in the Bay of Plenty is thriving and the three host clubs – Devoy Squash & Fitness Centre, Mount Squash Club and Te Puke Squash Club – have undergone big refurbishment projects in preparation for the event with new kitchens, the latest technology, painting and more. All clubs have strong junior programmes, supported by Junior Tournament Series, for beginner players and representative squads facilitated by Squash Bay of Plenty.

A number of our budding young local squash players will form part of the volunteer crew as Court Attendees. They’ll be looking after the players, cleaning the courts and, of course, they’ll be courtside to watch the action live. They are so excited to be part of the event and to watch some of their squash heroes play. No doubt they’ll be inspired to go further in squash.

More than 150 volunteers have signed up to be great ambassadors for the city and squash. We have a strong squash community in the Bay of Plenty so it’s fantastic that so many squash personnel have put their hands up to help, as well as the many other volunteers who just want to be part of it.

Two Bay of Plenty players, Camden Te Kani-McQueen and Nadia Hubbard, have been selected in the New Zealand team for the World Championships. Kylie Lindsay, former Commonwealth Games representative, is the Assistant Coach to the New Zealand Junior Women’s team. She is a Squad Coach with Squash Bay of Plenty and based out of the Devoy Squash & Fitness Centre.

Having competed on the world circuit for a number of years, Kylie brings a wealth of experience and valuable insight for the players.

“These two young athletes from Rotorua have been part of Squash Bay of Plenty’s talent development programme for a number of years so it’s fantastic to see them achieving higher honours and in our own backyard. We’ll be watching their performance with interest,” says Kylie.

It’s all go for final preparations in the next few weeks before the athletes arrive. It’s not often a world event happens onto our back doorstep. The clubs will be free entry, while the Queen Elizabeth Youth Centre, which will showcase a full glass court and seating of up to 1000, will be gold coin donation entry – so there’s every reason to be part of the action.

The Championships is being livestreamed. Check out all the matches, draws and results on www.wsfworldjuniors.com