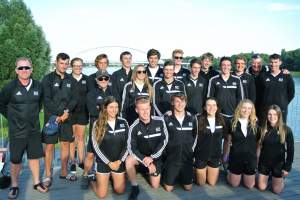 At the end of 2016, it was hard to see how canoe slalom could top such a successful year – we had an Olympic medal, the inaugural AIMS Games for canoe slalom and the opening of a world-class facility in Auckland. But it seems we've done it.

The five-race European World Cup season has just finished, AIMS Games was on locally at the same time as the World Champs in France last month, and prior to that the Juniors and U23 had their World Champs in Slovakia.

Of the various NZ representative team members, from junior to senior, more than 80% started their paddling in the Bay of Plenty (18 from 22 paddlers) and most still live locally.

There is much to celebrate for our local paddlers: At his 10th World Champs, our most senior male paddler and Olympian Mike Dawson has just had his best-ever World Champs result, while the youngest member of the NZ junior team, Zack Mutton from Okere Falls, also had a top 10 junior World Champs finish, emulating his older mentor’s feats at the same age. Mike also picked up a bronze medal in the Extreme Slalom World Champs.

Luuka Jones has built on her stunning Olympic silver with several finals (top 10) in both K1 and C1 in Europe, and narrowly missed collecting New Zealand’s first-ever Canoe Slalom World Champs medal with a fourth place.

This year was the second for the AIMS Games canoe slalom and we built on our entrants from 36 in 2017 to 59 this year, with a wider geographical spread. Entrants came from schools in Tauranga, Opotiki, Matamata, Hawke’s Bay, Mt Maunganui and Rotorua.

The top school was Otumoetai Intermediate, winning a number of the individual, as well as the team, races. Of the individual year group winners, nearly all were from Bay of Plenty schools:

The Europeans get some down time now, while our domestic season ramps up, making a gruelling schedule for our top athletes.

For those wanting to have a go at canoe slalom in the Bay of Plenty or if you want to know more, visit our website for all the info about training camps, races and how to get started.