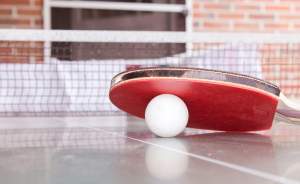 Rotorua’s Jessica Macaskill is National Girls Co-Coach, and is currently with New Zealand’s Oceania Hopes (Under 12) team in Tweed Heads.

At the National Cadet Trials in Hamilton, held in January, Max and Marielle both sneaked into third place, and Abbey placed fifth. Sulav Karmacharya and Clay Straker from Papamoa competed well in the National Hopes event.

Following strong performances in Hamilton, Max was selected for his New Zealand representative debut at the Oceania Junior Championships in Suva in April. His preparation is assisted by the recent arrival of 2014 Commonwealth Games representative and Level One Coach Shane Laugesen.

Max is joined in Fiji by National Para Coach John Tuki and Welcome Bay’s experienced Class 8 champion Victor Kamizona. Victor’s canny style is enhanced further by a new rubber that bamboozles strong opponents. He is aiming for a medal at the Oceania Para Champs and a chance to play at the Gold Coast Commonwealths Para event in 2018.

Several Tauranga Veterans are training in preparation for April’s World Masters Games in Auckland, with most likely to play the social grade. We also expect numerous Bay entries to the TTNZ Country Clubs tournament in Taupo on May 27, with the hosts being inaugural champions in 2016.

This caters for both beginner and intermediate level coaching, and will be popular preparation for AIMS Games and BOP Secondary Schools events. Several Parafed BOP and Special Olympics ‘Have a Go’ days will be run prior to Senior Club. Elsewhere, SportBOP Kiwisport will be delivered into prioritised schools.

Memorial Hall also has a Wednesday daytime session from 12.45pm to 3pm and a club night from 7pm to 9pm. Papamoa Club restarts 7pm, Thursday 4 May at Papamoa College Gym and Rotorua and Taupo clubs resume shortly.