It has been a great start to the year for basketball with loads of events and competitions across the Bay of Plenty.

3x3 looks certain to continue to grow in popularity and scale especially as it is now an Olympic sport. Adding to this, Basketball New Zealand recently announced two New Zealand based conferences in the professional Japanese 3x3 league starting in 2019, and professional leagues for both men and women starting all around the world. Opportunities continue to expand for 3x3. 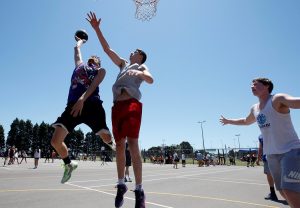 The representative programmes are underway and Tauranga City Basketball will have a record number of teams (twenty-two). The Bay will be represented by 31 teams (including nine Rotorua teams) at the Mel Young Easter Basketball Classic, which is again being being held in Tauranga. As part of this development event, John Martin FIBA Referee Educator will lead the referee education.

May will see the Zone 2 Under 15 and Under 17 Championship in Tauranga plus the start of the TCBA Winter Competitions. Venue issues mean the weekly competitions are now having limited numbers, so make sure your school or group get your teams organised early!

June sees Masters Basketball in Tauranga along with a NZNBL game at QEYC that is sure to sell out. Tickets will be on sale in March so be sure to watch out for these.

Pathways and possibilities for New Zealand’s basketballers both male and female continue to grow. It is great for Tauranga City, and the wider Bay of Plenty, that basketball is able to bring some of these opportunities here. With over 60,000 bed nights a year from basketball events in the Bay of Plenty, these produce a large economic spin off for the region.

I hope you get the opportunity to come and support the local sides playing here in events throughout the year.