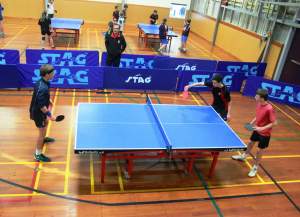 It is prime-time for BOP Table Tennis, with lots going on around the Bay.

There was moderate success at the North Island champs, with Xavier Lea winning silver in boys under-18 and under-15 doubles and Max Henderson finishing as an under-13 boys’ singles semi-finalist. Abbey Daisley was women’s C-Grade runner-up, and a multiple doubles finalist.

The Boys and Mixed Senior Events were closely contested, culminating with a key victory by Otumoetai’s Lucas Tilsley against Rotorua. In year 9-10, Tauranga Boys, led by Max Henderson, edged out a strong Papamoa line-up in their opening match, and were untroubled thereafter. Both schools travel to the National Secondary Schools Champs next week. Bethlehem College finished runner-up amidst some uneven contests.

We look forward to ten days of table tennis at QEYC in early September. On Sunday 4th a Schoolteacher Coaching Course is being run, with spaces still available for anyone keen to deliver table tennis at grassroots level. An evening umpiring course will also be conducted, on Wednesday 7th. Email jlea@xtra.co.nz for further information on either.

AIMS Games begins Monday 5th, with 125 participants creating a packed schedule. Finals are being played on the Friday, with spectator’s welcome.

The Open is excellent preparation for many BOP players headed to TTNZ Nationals in Auckland later in September, with strong boys and girl’s teams likely and a men’s team including former NZ representatives, David Kilmister and Calvin Kwong.