SportsTalk - Excitement Building for Season Ahead 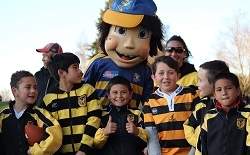 Excitement is building for the Bay of Plenty Steamers' first Mitre 10 Cup game this Saturday 20 August when they return to play at the Tauranga Domain to take on Taranaki.

It was fitting to see at the recent Mitre 10 Cup official launch, the unveiling of the Rugby Cup, which Bay of Plenty Rugby was the first team to lift in 1976. Led by courageous captain and flanker Tuck Waaka, Bay of Plenty were renowned for their enterprising rolling maul and speedy outside backs. This year our Bay of Plenty Steamers team will make their bid to create more history and memories as they represent our proud region against the best from the rest of the Country.

The Mitre 10 Cup is the perfect opportunity to bring the family along and support our boys in Blue and Gold. There will be a family zone for kids at every home game. The family zone will have some free giveaways, skills and drills and pre-game autographs. Plus for this weekend’s game against Taranaki on 20 August, all kids will eat for free, thanks to the support of New World Mount Maunganui and the Little Big Markets. Couple this with affordable ticketing and exciting rugby action it is the perfect afternoon out for all.

Our second home game at Tauranga Domain is on Father’s Day, Sunday 4 September when the Steamers take on Otago. We have two father and son combinations in this year’s team both Steve Axtens and Don Thwaites have played for the Steamers, now their sons Matty Axtens and Jeff Thwaites are following in their footsteps. This game will be a great Father and Son afternoon out for all, grab a bite to eat from the Little Big Markets, a beverage from the Mount Brewing Co. Brewery campervan, then sit back and enjoy the game as we try and win the battle of the two provinces that proudly wear Blue and Gold. Not only will the Steamers be out on the park but our Bay of Plenty Women’s Volcanix side will be playing in the curtain raiser against Counties Manukau women in their Farah Palmer Cup match kicking off at 12.05pm.

Our Rotorua home games kick off with Northland on Friday September 9 at 5.45pm. It is the perfect occasion for us to thank our Clubs for their support and our local Junior Club Rugby teams. We will also be celebrating our inaugural Bay of Plenty 1976 team who will get a chance to hold the Rugby Cup once again.

In week six the Bay of Plenty Steamers with battle it out against Auckland for the John Drake Boot. This game we will be celebrating our Maori heritage in the lead up to the British and Irish Lions test match held next year. With Rotorua the home of Maori culture it is only fitting to celebrate Maori Rugby within the community. This will be a very special day with some amazing activity planned that I am sure will create lasting memories.

The Bay of Plenty Steamers final round robin home game of the season on Sunday 9 October will be the perfect opportunity to bring the family along and support the team. All kids attending will get to eat for free thanks to the support from Fruit Monster and Rotorua Events and Venues. It is another great chance for the kids to enjoy the Family Zone and meet their favourite Steamers.

Get your friends and family together, throw on your blue and gold, and we will see you at the game!

For further information and ticketing details please check out our website www.boprugby.co.nz.