The table tennis community in Bay of Plenty is abuzz with several big events hosted locally in coming weeks and many leading players visiting Tauranga. 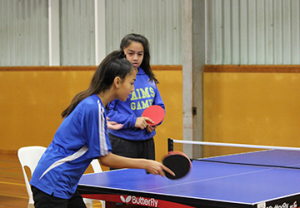 There are 126 boys and 53 girls entered in the singles and doubles events on Wednesday and Thursday, with semi-finals and finals held Friday September 14. Spectators can expect a tussle between the girls’ national squad quartet of Joanna Yang and Minette Whitehead from Waikato, Takaimaania Ngata-Henare from Northland and Angela Zhang from Auckland. The favoured boys are Alex Liu and Leo Mamedov from Auckland, but Johnny Bae from Canterbury may push them.

QEYC hosts the premier event of 2018, the TTNZ Senior and Junior Nationals, from 6-13th October, 40 years since it was last hosted in Tauranga. Large fields are expected for both teams and individual’s events. Amongst overseas visitors are leading Australian Junior, Rohan Dhooria, experienced Sri Lankan representative Chalitha Ranjana, and a group from New Caledonia.

Bay of Plenty hopes to field teams in all grades, and looks forward to the return of Matt Hetherington to Tauranga, holidaying from his media role with USA Table Tennis, and Paul Innes and Shane Laugesen back from long breaks off the New Zealand scene. Big things are expected from Max Henderson after strong displays for Tauranga Boys High at NZ Secondary Schools champs and BOP Schools champs recently.

Spectators are welcomed at all upcoming events, and offers of volunteer assistance will be well received. A training session for umpires and a junior umpire competition will both be promoted at the National Championships. All enquiries to ttnzed@xtra.co.nz