We have had a busy year so far and things are just heating up!

The 2019 season got off to a great start in February led by the annual Brisbane Bronco Hub at Mt Maunganui with 175 players, ages 13 to 17 taking part.

For the first time ever girls were invited to attend showing up with impressive numbers of 90 players.

The partnership with the Broncos and this region goes back to 2015 with the aim to improve the skill level of kids playing the game in the Upper Central Zone and to assist those with representative ambitions by teaching the fundamentals and developing good habitual standards to help them on their way. The Zone was joined by local coaches, some who had played or coached at national level, to deliver the skills sessions.

The players enjoyed their time under elite coaching and likewise the staff were impressed by the professional attitude of those that attended.

Long serving BOPDRL Board member Bill Liddell stepped down from the position of Chairman after decades of great service to Rugby League in the Bay community. His position has been filled by the very capable Graeme Hill with AJ Purnell the new chair of the BOP Referees Association. 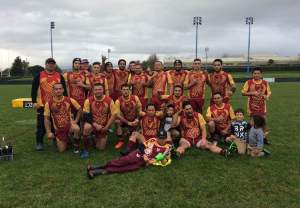 Mid March saw the running of the successful BOP 9 A-Side Rugby League Youth Tournament for U15 & U17 Boys held at Puketawhero Park which was run in conjunction with the Rotorua Youth Festival. The day saw Mangakino Hawks take out the 15s and the dominant Taupō Phoenix victorious in the 17s.

In the BOP Mens' 9s Pacific Sharks from Tokoroa won both Prems and Reserves in what is an encouraging sign for their season ahead.

Over in Tauranga Otumoetai Eels Prems won their 12th straight title taking out the 2019 Werohia Shield while Kawerau were undefeated in the Reserve grade.