The 2018 winter season has been a successful one for both Bay of Plenty and Tauranga Hockey Associations.

The main highlight would have to be sending combined senior men’s and women’s teams away to the National Senior Association Tournament held in September. The senior women’s team bought home the bronze medal after beating Canterbury 4-2 in their playoff for third and fourth. The senior men’s team came home eighth, which is also a great effort considering the two associations haven’t fielded a men’s team for a couple of years. 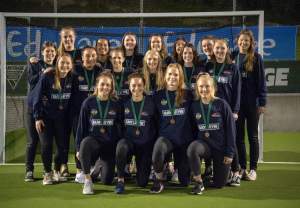 In a new Northern Region tournament, the Under 15 development teams travelled to Pukekohe to play for the Grant McLeod Trophy. The Tauranga girls and boys teams both finished second, while the Bay of Plenty girls and boys both placed sixth.
Whilst the winter season is now finished, hockey doesn’t stop with 90 teams registered to participate in the summer hockey league in Tauranga. The teams will play in the 5 and 6 aside format on a half field in a variety of grades from primary right through to adult competitive. This is a great way for those who are keen to learn how to play hockey, or who would like to play socially, to give it a go.