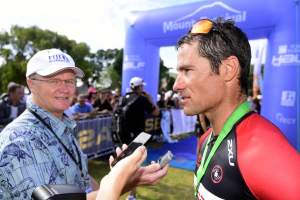 Peter White has been recognised in what is referred to as the Oscars for sports writers and photographers.

The Bay of Plenty Times sports writer is a finalist in the 2017 Sir Terry McLean Sports Journalism Awards for best provincial/community journalist.

White said the awards, known as the TP Awards, were like the Oscars for sports writers and photographers. "To get a TP is what everyone wants," White said.

The Tauranga-based sports writer and 2016 Bay of Polenty Sports Award judge said it was the first time he had been named a finalist for the prestigious award.

"It is a good feeling because it means you have achieved a high standard of sports writing. It is nice to stand out occasionally," White said.

"I think it is reflective on the Western Bay of Plenty community who have been so open in sharing their stories, I really appreciate it."

"I was fortunate enough to have a one-on-one with him after the boys' college assembly," he said. "That story was very well received."

His entries also included an article based on the Aims Games, where more than 10,000 athletes from about 300 schools competed in Tauranga, and a human interest story on a local sportsman.

White said he had become a sports writer to combine two of his favourite things - sports and writing.

He has interviewed many local sporting heroes in his career including All Black Nathan Harris, Black Caps Kane Williamson and Trent Boult, Emirates Team NZ helmsman Burling and many more.

"I try to find something different about everyone who I interview."

The 2017 Sir Terry McLean Sports Journalism Awards, sponsored by Sport New Zealand, will be presented at the Ellerslie Function Centre on November 30.