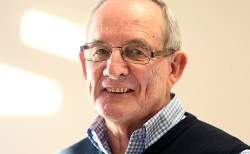 When describing how he felt about becoming a Member of the New Zealand Order of Merit, Graham Young tried - and failed - to avoid cliches.

"Anything I can say ends up being a cliche. It is a real honour. I feel really grateful.

"It's not just an honour for me, but for my family and for the people I've worked with. That's a cliche as well, but it's true. Nothing I've ever done in education I've done on my own."

Mr Young's love of learning was nurtured from a young age by his father, who was a freezing worker. The children of the family would gather at the kitchen table every night to do homework, aided by their dad.

"It's probably because of that I went into education."

He started out at James Cook College and when his wife was expecting their first child, they moved up to the more affordable Kaitaia. From there, it was off to Tauranga where Mr Young had been appointed head of maths at Tauranga Boys' College, and in Tauranga he has remained.