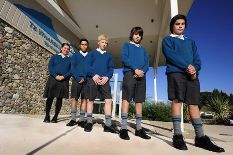 Te Wharekura o Mauao is beginning to make its mark on the school sporting scene both locally and nationally.

The co-educational, total immersion Maori-language school is in just its second year based in the award-winning campus in Bethlehem, Tauranga but already has five New Zealand national title-holders among their whanau.

Joe Hughes, 14, has been the age group Taekwondo national champ in the past four consecutive years and Ronin Ainsley, 14, is the national 14-16 years wrestling champ. Te Kanahi Kuka, 14, and Paki Ormsby, 12, have been the Brazilian Jiujitsu champs for the past two years, while basketballer Nikita McGruer was in the New Zealand under-16 team last year and under-18 team this year.