Silver Ferns to Bring the Flair in Rotorua 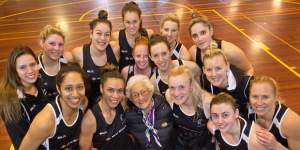 Excitement builds in Rotorua for the final test series game between the Silver Ferns and Jamaica on the weekend.

The Silver Ferns and Jamaican Sunshine Girls will battle it out in the third and final test of the New World Netball Series for the Taini Jamison Trophy tomorrow evening.

New Zealand have already wrapped up the series and trophy having won the first two tests - beating the Sunshine Girls comfortably 72-38 played in Nelson in the first clash and 61-38 in Palmerston North on Wednesday night.

However Silver Ferns coach Janine Southby insisted the team will not be complacent despite the 2-0 series advantage and wants to "put on a show for the Rotorua crowd".

"We are absolutely not wanting to relax. We want to be the best and give it our everything," she said.

"It will be very important for us to put in a huge defensive display once again so we turn over lots of ball because that's what leads to our chances.

"The crowd can certainly expect a tight tussle and a well contested game.

"We want to show speed and flair and give a fitting display to end this special series."

Silver Ferns captain Katrina Grant said the side have been focusing on their "processes and interplay around the court" after Jamaica made her side fight a lot harder for their second test win.