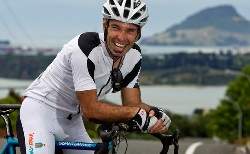 The Club Road National Championships are the pinnacle for all road riders in New Zealand with titles up for grabs from under-15 to Masters age groups and Paralympics.

Winning one national title is a major achievement for any athlete but last week Rio Paralympics hopeful Fraser Sharp won two C Class titles at the nationals in Alexandra.

Sharp said the key thing for the Paralympic selectors was not so much where the riders finished but their power output in the time trial.

"I recorded a good power output even though I had to slow down for other competitors at times so I could get past them safely. I feel I have a very, very good chance of making Rio but I don't guarantee anything until I hear my name announced," he said.

Tauranga resident Sharp is confident his outstanding rides have clinched selection for him for the Rio 2016 Paralympic Games.

The team will be announced on May 9 and Sharp has done everything asked of him by the Olympic selectors.