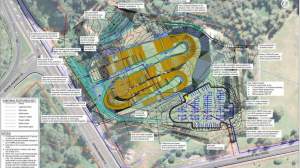 As a child, before she was New Zealand's first BMX Olympian, Sarah Walker would travel from Kawerau to Rotorua two or three times a week to hone her craft on the local track.

She is therefore perfectly placed to know the value of the new, world class track being built by the Rotorua BMX Club on the corner of State Highway 5 and Waipa Mill Rd.

"I'm really excited. The previous Rotorua track, obviously that's my home club and I grew up going to that track, I was one of the first members of that new club and it's probably one of my favourite tracks to ride and jump and have fun on. I think that set a real standard for what Rotorua wants to do with this new track," Walker said.

The reserve land, leased to the club by the Rotorua Lakes Council, was blessed in September, three years after the project began, marking progression into the final stages.

The club has been hard at work since then, making sure the plans and design for the course were perfect, before beginning construction this week.

"It's an ideal location and the background that has gone into it has been really well done. It's not just slap it together, build a track and figure out later on it should've been done differently.

"It's been really thought out and they've involved so many people. I was involved in the design process as well as some younger kids and older kids, it has been really athlete-involved. Then they've looked at things like the wind's main direction so we can ride more often without the weather affecting us. The drawings look awesome and they've made sure it's not just awesome drawings, it's going to be really cool to ride.

"To have a track of that calibre and to have it done properly is really exciting, I'll probably be coming over a couple of times a week to ride it," she said.

Project co-ordinator Melanie Short said contractors were at the site now getting construction under way.

"When we did the site blessing last year we were in the process of finalising the track design. We spent a lot of good time ensuring we had the right design.

"Our point of difference is the 8m ramp, we'll have an 8m and a 5m. The 8m ramp is for elite riders and for a club strategic view it gives our riders something to strive for and is also a great facility for the wider community."

Short said the club had been "so fortunate" with its funders and wanted to assure members of the public that progress was being made.

"NZCT and the Rotorua Trust, I can't stress enough how aligned they have been to the project and how patient they've been with the time it has taken.

"The message we want to get out there is the time it has taken is not because we've been sitting around, there has been a whole lot of consultation around the track design because it has to be right first time. We're a voluntary group, working alongside the funders, getting the best price for the best contractors.

"We're working with a budget, which had to be re-cast, and went through a tender process. We actually decided to split how we would build the track. Instead of having track builders from the start we've got an earthworks construction company in to put all the dirt in the right places and then the track builders will come in over the top of that.

"We have a winter resource constraint, where from mid-to-late April to mid September we're not able to do any significant earthworks. That works for us because the earth has to sit for three months to settle. From September 15 there will be a lot of action, we're hoping for a six-to-eight week construction from there."