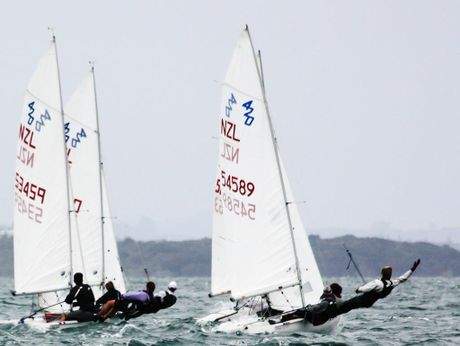 Young Tauranga sailors Sam Barnett and Zak Merton have made the 2013 NZL Yachting Trust Youth Team to compete at the ISAF Youth World Championship in Limassol, Cyprus, in July.

They are the latest in a proud tradition of Tauranga Yacht and Powerboat Club sailors to represent New Zealand at the annual ISAF Youth World Championship Regatta which brings together the world's best youth sailors.

The 16-year-olds will compete in the two-handed 420 class and straight after the regatta will travel to Valencia, Spain, to compete in the Open Men's 420 World Championship.

Barnett is a recent Tauranga arrival, having moved here with his family in late 2011. He grew up in Devonport, Auckland, and learned to sail at Wakatere Boating Club but later than most, having previously been into mountain biking. However, once he got on the water, he has never looked back. In his first full season in the Optimist Open Fleet, he achieve his goal of representing New Zealand at the Asian Optimist Championship.

Merton grew up in Southland but when he moved to the warmer climate of Tauranga, sailing became his sport of choice. He began sailing in an Optimist but has also competed in the P class and Starling and has twice been selected to represent New Zealand at the European Optimist Championship. Last year he was selected to represent New Zealand in Japan at the International Friendship regatta in the Laser 4.7, a boat he had previously never sailed, and came third.

The boys decided to join forces in mid-2012 and were second at the Sir Peter Blake Regatta in December, fourth at the 2013 Oceanbridge Sail Auckland and won the 420 North Island Championship in February 2013. At Easter, they came third at the 420 National Championships in Takapuna, in a closely contested regatta, and this result plus their other scores in the selection regattas won them the opportunity to compete at the 2013 ISAF Youth World Championship.

The boys agree there is still a lot for them to learn about sailing the 420. "It's a great boat to sail and fun with such a good group of sailors involved in the class. It's a very competitive group," said Barnett.