Running Through the Weather 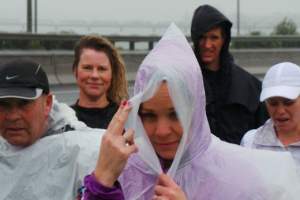 About 1600 people braved rain and wind for the city to surf fun run and walk today.

“We still had a very good turnout, in fact about 94 per cent of people turned up. We still had a few late entries on the day as well,” says organiser Murray Fleming.

“Basically nothing dramatic happened which was really good for us because it was all managed. We're very happy with that.

“We just made the call early that there would be no prize giving so people knew. And you have just got to make those calls early. And no one's complained about that.

“So all of the prizes etc will just be sent out, so they are going to have an enjoyable experience, rather than standing round and shivering. There's no need and no point in that.”