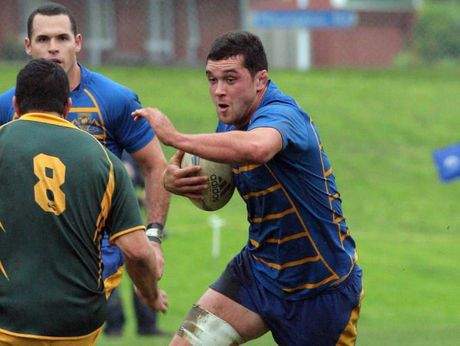 auranga Sports' seemingly unstoppable path to win the Bayfair Baywide premier club title has hit a major road bump with the naming of the contracted Bay of Plenty Steamers players.

The runaway competition leaders are unbeaten in 2013 and that is reflected in the naming of 13 Tauranga Sports in the Steamers squad - a magnificent achievement that reflects well on the coaching and development of mostly home-grown players.

But those players are likely to be unavailable for the upcoming semifinals as it is expected that contracted Bay of Plenty squad members will be preparing for the ITM Cup campaign that kicks off in August.

Bay of Plenty Rugby chief executive Mike Rogers said it would be a case by case basis with players but he expected they would be withdrawn.

"We set the club window late last year after the season and it was prior to this year's ITM Cup programme being determined.

"There was a week's extension, with the ITM Cup being brought forward, and that had an immediate impact on our club window. After that, we started dialogue with clubs that there would be some crossover there between the preparation of the ITM Cup team and the club window," Rogers said.

"We said we could we look at a mid-week game, or a two-round week or something like that, to alleviate the pressure on that crossover. The feedback from the clubs was they wanted to retain the format and the window as it was, so we signalled then there was potential that maybe some players can't be involved in semifinals and finals.

"But it was something we were adamant about after last year's ITM Cup, when we did not think we prepared the team as well as we would like to. Last year we gave the clubs access to their players as much as possible, including the club finals, but we felt we needed to do a better job preparing our guys for this year's ITM Cup.

"It is a challenging situation with the club window, ITM Cup and Super Rugby. We face the same thing with Super Rugby. We have contracted players that if the Chiefs make the final we are not going to have them until the second round of the competition potentially, which is not ideal from our point of view.

"But we just have to adapt to that and have tried to deal with that by contracting a larger group of players and preparing our guys better, so we are less reliant on our Super Rugby players.

"We want our guys playing club rugby and it has been highlighted by the number of players contracted based on their performances in club rugby."

Tauranga Sports is clearly the club most affected but former captain Adam Robinson, who played a club record 150th premier game recently, says they have been building depth knowing they could lose key players.

"Over the last three years it has been a thing we have had to deal with. This year it has definitely been in the back of our minds that we could lose those boys but we have good depth. It is something we have definitely planned for," he said.

"We are more than happy for those guys to get higher honours and it's great for the club that they have done that. We celebrate it. [coach] Mike [Rogers] has made the announcements on a Tuesday or Thursday at training and they have probably been our best trainings we have had, because the boys are on a high for those guys getting the call-ups."