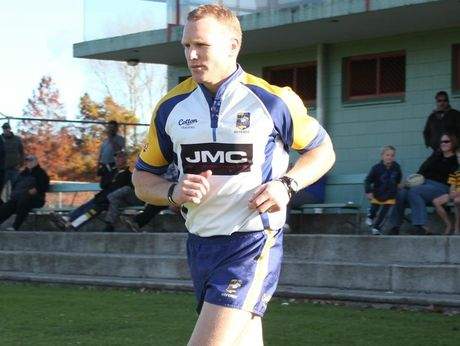 Brett Johnson only lasted three minutes in a Steamers jersey, but if his rapid rise through the refereeing ranks is anything to go by, his time in the professional ranks is far from done.

Johnson, this month's BOP Rugby Referee of the Month, has been named in the New Zealand Rugby Union's national development group for 2013 in just his third year brandishing a whistle.

His brief Steamers stint came to an end courtesy of a large Tongan hooker well-known to Bay of Plenty rugby fans.

"I made the Bay of Plenty squad for one season but got injured in my first game against Waikato. I only lasted three minutes playing for the Bay. That was it - over.

"We went over to play Waikato at Waikato Stadium and Aleki Lutui came through and busted my arm out of its socket. I had a badly dislocated elbow, so that took a little while to come back from."

His exit from provincial duty may prove to come as quickly as his entry into the professional refereeing ranks.

"It's my third year as a referee after 27 years as a player," Johnson said.

"Vinny [Munroe] rang me a couple of weeks ago and told me I'd made the squad. They were looking at 23 potential new referees and they've picked one from the provincial heartland and another three from the unions to be involved with the New Zealand team."

The two-year placement includes a national camp in mid-July including fitness, theory and practical testing, as well as assistance with mentoring and coaching.

Johnson should know what to expect after coming under the watchful eye of referee manager Paul Greenstreet and refereeing coach Michael Karton, as well as the Bay's strong stable of high-class whistle blowers.

"There's obviously a lot of really good refs in the Bay and every time they say something to me I write it down. I've got a folder that I go back through because they have given me such great advice.

"Shane McDermott, Nick Briant, Bryce Lawrence, Glen Jackson - all these top refs with such great information - I'd be mad to not try to take it all on board."

A love of rugby drew Johnson to maintain his connection with the sport, though the transition did not go quite as planned.

"I found it harder than playing to be fair. You're managing so much more. You've got not only the possible 22 players on each team but you've also got the coaching and management staff, sometimes the crowd, and also the assistant referees too.

"You've got to have thick skin. They say you're only ever going to please half the people half the time, which is true. You referee what you see - it's not personal. When you're out there you are seeing pictures of what is happening and then applying your knowledge of the law to that."

The 34-year-old prides himself on his fitness and is down from his playing weight of about 105kg to just 98kg. He is in line for some Heartland Rugby appointments this year, which means his wife will likely no longer be required to videotape all of his games.

The jump in standard should not phase him seeing as he recently controlled a training match between the New Zealand Sevens team and the visiting Cook Islands.

Greenstreet lauded the naming of Johnson as a clear indication that former players have the ability to move swiftly through the officiating ranks, given they have the right attributes.

"This athlete has just started his third year as a referee. Being named in this group is an amazing achievement and testament to the effort he has put into fitness, laws and learning his trade as a ref in such a short amount of time.

"It really does reflect the effort, attitude and commitment of the man."