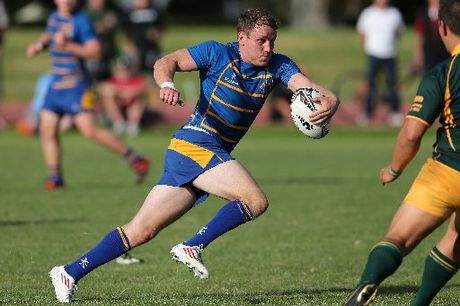 The depth of talent on show in the Baywide club competition after 10 rounds has been the positive feature of what has been an entertaining start to the season.

The dominance of the Tauranga-Te Puke teams and continued decline in Rotorua rugby will again be replicated in the Bay of Plenty rep teams.

With 10 of the 18 rounds of Baywide Premier club rugby completed, it is timely to assess the form of the best club players and come up with a dream team of the best 22 players.

Not surprisingly, Tauranga Sports dominate my team and they are undefeated in 2013. They are on 49 points - well clear of Te Puke (33), Greerton Marist (29), Mount Maunganui (27), Whakarewarewa (25), Te Puna (25) - and playing some sublime rugby which can only auger well for the Steamers.

Tauranga Sports fullback Steve Honey has been a revelation this season and thoroughly deserves his first Bay of Plenty contract.

A broken foot sustained against Te Puna has left him time to get stronger in the gym and the talent he has produced spasmodically in the past is now ever present in his game. With his pace and clever angles he runs, he could be a super star in the ITM Cup.

The Bay is well served with quality wingers and this was one of the toughest categories to decide on.

Whakarewarewa's Chanse Perham is a class finisher with pace to burn, while Tino Nemani was a star for Greerton Marist before the injury-plagued Highlanders swooped on him. Tauranga Sports pair of Lewis Hancock and Nick Thomson are also top-flight wingers.

Tauranga Sports players fill the rest of the backline and have consistently lifting the bar higher this season.

First-five Paul Morris is new to the Tauranga scene and his goal kicking reminds me of Glen Jackson at his best.

He also has an eye for the gap and is a robust defender for a No10.

Notable mentions for Te Puke Sports' Simon Rolleston, who has been in great form, and Willie Ripia from Rotoiti.

Josh Hall delivers a snappy passing game at halfback and the Steamers rep looks to have stepped up this season, particularly with his running game around the ruck fringes.

Greerton Marist's Dan Deveraux has been another top performing halfback and is likely to also be in Steamers' coach Kevin Schuler's plans.

Injury last year curtailed the rapid progress made by NZ Under-20s No8 Carl Axtens but he is thriving this season, fully fit and looks every inch a future Steamers captain. His work in the loose and lineouts have always been a standout but he has become much more physical and is now the complete No8.

Bay of Plenty has produced a string of quality flankers in recent times - think Sam Cane, Tanerau Latimer, Luke Braid for starters - and this year's club competition has thrown up another top quality group.

Te Puna's Kieran Black is my openside pick and he has been impressive in a pack that is not always going forward. He is a strong defender and quick to the break down.

Mount Maunganui's Johan Bardoul has come from the top-quality Waikato competition and until getting injured he was a brute on defence.

Bay fans love their blindsides to be tough, like Wayne Ormond, and Bardoul certainly fits the bill there.

Tim Bond from Te Puke Sports has played in Japan for years and is a big unit with high class skills who would comfortably make the step up locking the Steamers scrum.

Beau Williams is a different sort of lock - more mobile with plenty of pace for a big man - and deserves his spot.

So there we have it.