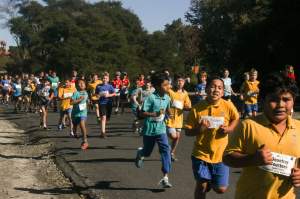 More than 2000 Rotorua primary and intermediate school children will complete a "marathon" as part of an introductory experience to long-distance running.

The Rotorua Mini Marathon sees pupils run nearly 40km in the weeks leading up to the final event and log their progress in an event "passport", which they can keep as a record of their achievement.

On Friday the participants will log their final 2.1km to complete their 40km goal on the same course used for the Rotorua Marathon, which is to be held the next day.

Vanessa Fisher said her 7 and 9-year-old sons have been taking part - the first time for her youngest and the second for her eldest.

They had already completed the 40km distance at Ngongotaha Primary School, she said.

She said a lot of parents did running and sporting activities so it was great to have something for the children as well, especially in Rotorua with the Rotorua Marathon.

She encouraged both of her children to participate this year.

"I went down last year and saw what happened. It was so well run, all high energy and the kids had a great time."

Noah Fisher, 9, said he liked taking part in the Mini Marathon and the 40km had felt pretty easy because they had done 2km to 3km a week.

She said his 3-year-old brother, Cian, had also wanted to do it but was not old enough, so they copied Eoin's "passport" and Cian had been running too. They were both active and loved being outdoors, she said.

She said the Rotorua Mini Marathon encouraged children to be active and be outdoors rather than sitting in front of the television.

The event is a collaborative project between Event Promotions (Rotorua Marathon Directors), Events and Venues (Rotorua Lakes Council), Athletics NZ and Sport Bay of Plenty, with a goal to get more primary school children involved in the Rotorua Marathon and other running events.

"The mini marathon gives them an idea of just how far a full marathon is, and a true sense of accomplishment when they finish the final 2.1km," Sport Bay of Plenty Central Bay of Plenty primary sport director Melissa Gordon said.

Now in its seventh year, the Rotorua Mini Marathon had gone from strength to strength, starting with just 60 children in 2010, Ms Gordon said.

"The growth of this event is phenomenal - and it just keeps growing! We now have an outstanding 2171 children entered this year, up from 1530 last year.

"The excitement and buzz around the schools is awesome."

To acknowledge the effort the children have undertaken, each participant receives a certificate of completion and the opportunity to take home a spot prize.

The first race begins at 10am outside the Rotorua Energy Events Centre.