Rotorua students get a taste of winter sports 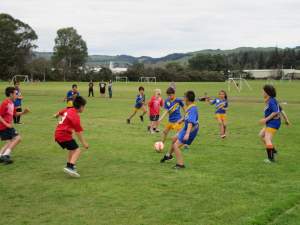 The event, held on Tuesday 26 September, is designed to give Central Bay of Plenty school children a chance to participate and compete in one of five ‘traditional’ sports – rugby, netball, football, miniball and hockey.

Sport Bay of Plenty Primary School Sports Director (Central Bay of Plenty) Melissa Gordon says for many it’s a chance to try their hand at a sport they have never played before and for others it’s a chance to compete against the best sports teams from Rotorua’s centrally located primary schools.

“For this particular event, we have volunteer coordinators from the different sports codes, plus about 40 high school referees lending their time – not to mention the numerous coaches and parental helpers who give their time to the teams.

“This is a real collaborative event with many people who give up a day to help out the teams at the various locations.

“While the aim of the day is to give as many children as we can a taste of sport, it’s also an opportunity for local high school students to experience refereeing games.”

This year the events will be held at the following locations: Rugby at Westbrook Rugby Fields, football at Puarenga Park, hockey at Smallbone Park, netball at Westbrook Netball Courts and miniball at the Rotorua Sportsdrome.