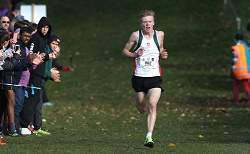 Rotorua has been praised by Athletics New Zealand after hosting a "wonderful" NZ Secondary Schools Cross Country Championships over the weekend.

It was the first time in the annual cross country event's 43-year history to take place in the area - held at the Agrodome and Ngati Whakaue Tribal lands.

With 960 runners from 125 schools taking part, across nine different races, including an inaugural relay championships yesterday, thousands of spectators flooded to watch.

Brett Addison from Athletics New Zealand praised the competitors and said he was impressed with the event organisation, which was led by the race meet's manager, Jason Cameron, with input from Lake City Athletic Club and the local council.

"They really were excellent premier events. It was great to see such competitive races, especially the boys' which had a very quick start," he said.

"It was a fantastic course for all athletes to be running on. Jason and his team have done a great job in preparing the course and getting the facilities right.

"The organisation has been fantastic. It has been a wonderful event here in Rotorua."