Rotorua named as one of New Zealand's top Olympic towns 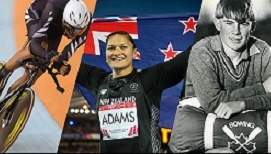 As part of our comprehensive build-up to Rio 2016, the Herald is counting down New Zealand’s top Olympic towns. Today, number eight — Rotorua. Find out how we compiled the list below.

Cyclist Sam Bewley vowed not to come off the track without an Olympic medal and he was as good as his word.

The 28-year-old helped pedal his team to bronze in the 4000-metre team pursuit at the 2008 Games in Beijing with victory over Australia at the Laoshan Velodrome.

"The first time is always going to be the most special and it made it all the more sweeter as we were underdogs in the race," Bewley said.

"I had texted my parents the night before saying 'I'm not coming off the track without a medal' so I'm relieved I lived up to my own pressure."

It's one of only five towns and cities that can boast multiple athletes who won medals at more than one Games.

Shot putter Valerie Adams, viewed as Rotorua's Olympic diamond, is the other, winning gold in 2008 and 2012.

Rower Brett Hollister, who won bronze in the coxed four at the Los Angeles Games in 1984, completes the town's roll of honour.

"It's incredible for Rotorua but it doesn't surprise me," said Bewley. "The whole community really promotes sport from a young age and the area provides a special adventure environment.

"And looking at Rio, once again Rotorua will be sending a strong group forward that have real medal chances."

Bewley's rise to glory on the biggest stage in the world was meteoric. He took to the track aged 17 and appeared at his first Olympics four years later.

His father Ken played rugby and cricket and, with wife Sue, encouraged Bewley play many sports from a young age.

"Getting into competitive biking relatively late actually helped because I put everything into it and was able to hit my peak at the right time."

Bewley and his team-mates qualified to race for bronze in Beijing after clocking a time of 3m 57.536s in the semifinals.

But they had the second fastest time in qualification - a fact which still leaves a bittersweet taste for Bewley.

"In all honesty we thought we should have been riding for the gold medal," he said.

"It wasn't meant to be for us but it just meant we were all the more hungry to make sure we came off with a medal."

The euphoria of winning bronze was followed by a sense of relief upon watching the New Zealand flag being raised.

"It was a very surreal moment on the podium - I remember immediately searching for my family in the crowd and giving them a fist pump," Bewley said.

Bewley will not be competing in Rio. His career entered a new phase when he quit the track after the 2012 London Olympics to focus on professional road racing with European-based team Orica-BikeExchange.

He is now based in Girona, Spain, where he has lived for seven years. Not much bigger than Rotorua, it's home to about 100 professional cyclists who socialise and train together in the nearby Pyrenees.

His new target is to compete in next year's Tour de France, likely as a support cyclist for Colombian rider Esteban Chaves.

Bewley's advice for any present or aspiring Olympian: "Don't let the occasion get the better of you."

"You will be surrounded by superstars and a media bubble. The hype and build-up is huge, but just stay level-headed and have a clear focus."