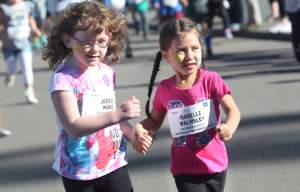 Nerves and adrenalin had children buzzing on the start line at the Rotorua Mini Marathon.

He said the children did 40km at school in the weeks leading up to today and finished off the marathon distance with the 2km event outside the Energy Events Centre.

The children had cards and teachers stamped off the kilometres.

"It's cool. The schools are buying into the health and wellness side of it. It's such a positive experience for the children."

He said the children had real school pride at the Rotorua Mini Marathon, cheering for each other.

Rotorua Intermediate sports co-ordinator Nicole Taute said it was great to have the pupils exposed to individual sporting events, rather than just their team sports.

She said they aimed to get the whole school taking part and had 236 pupils involved this year.

Rotorua Intermediate pupil Cameron Glasgow, 12, said he felt a bit anxious before the run about not sprinting out at the start and saving his energy.

He said although his whole class had to take part he liked doing it because it helped with his fitness for running and winter sports.

Cameron said he could imagine what it would be like doing the 42km in one go.

"I can imagine it, but I would be terrified to run that without stopping."

Rotorua Intermediate pupil Koan Hemana, 12, said before the run he felt adrenalin and after he felt proud.

He said he decided to take part because they had been told to take up as many opportunities as possible, otherwise they might regret not doing so.

Waikite Valley School deputy principal Lisa Dinning said it was a great event for the children because of the community feeling of all the schools coming together.

"A lot of our kids' mums and dads compete in the actual marathon."

She said this year they had the whole school of 57 pupils taking part.

"I enjoy just having fun and going out with my school for the day."

She said if she had to do the 42km all together she would be exhausted.

Waikite Valley School pupil William Schweizer, 7, said he was proud of himself for doing the run.