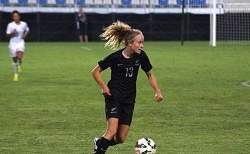 A former Rotorua player has been named a travelling reserve for the New Zealand women's football side for the Rio Olympic Games.

The New Zealand Olympic Committee announced the squad at a special assembly at Avondale College in Auckland today.

Paige Satchell, a former John Paul College student and Rotorua United winger, is one of four travelling reserves named along with an 18-strong playing squad.

Satchell, 18, joined Auckland side Three Kings United last year after moving north to further her football career and was first selected for the New Zealand side for pre-Olympic fixtures last month.

The New Zealand Women's Team, ranked No. 17 on the FIFA World Rankings, will face the defending Olympic Champions USA, Colombia (No.24) and France (No.3) when their campaign begins on August 3 in Belo Horizonte.