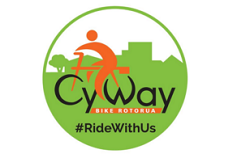 Following completion of a two-way cycleway on Morey Street in Owhata, the community is now being asked what it would like to see on the nearby Brent Road to link with the cycleway.

Meanwhile, work on footpath widening for a shared use cycleway in Springfield should begin mid-May and finish mid-July, weather permitting.

The Springfield cycleway will essentially be a 2.5m extension to the footpath along Springfield Road.

The CyWay project team is also establishing a new cycleway along Ward Avenue in Fenton Park.

Rotorua’s $5.52m CyWay project will see the development of a network of 26km cycling and walking paths that will connect the central city and forest mountain bike trails and is part of the Government’s $296 million Urban Cycleway Programme.

Rotorua Lakes Council sustainable transport team leader Jodie Lawson says the Ward Avenue cycleway will consist of on road cycle lane markings. This project will connect to the McIntyre Reserve, where a 2.5m wide concrete path will make its way through to Sala Street to connect to the Whakarewarewa Forest via a new crossing.

The third addition will be in Brent Road as a continuation of the two-way cycleway project on Morey Street.

“For now we’ve stopped works because we want to gather feedback from our community on what improvements they would like to see, and we’d love to hear from anyone who has ideas.”