Rippa Rugby finals set for the week ahead 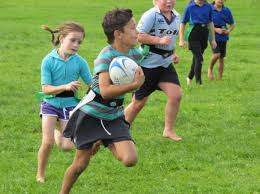 This week will see Rippa Rugby wrap up for another term in the Western Bay of Plenty.

Kendra Reynolds Bay of Plenty Rugby Junior Rugby Manager is pleased with the development of the players’ over the term and is looking forward to finishing off the term on a positive note.

“Our finals days are all about celebrating the growth and development of the kids over the term. It is fantastic to see the kids turn up week in week out and rip it up for the afternoon.”

Rippa Rugby finals will take place across five afternoon starting with Omokoroa module this afternoon, Otumoetai module on Tuesday 27 March, Te Puke on Wednesday 28 March, with the Waipuna module on Thursday 29 March and Papamoa module the following Friday on 6 April.