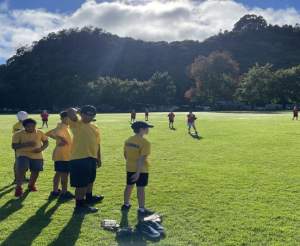 Despite awful weather predictions, the eastern Bay of Plenty's beautiful weather came out for the district's softball competition on April 1.

A couple of late withdrawals resulted in a quick change in the draw and it was great to see James St compete.

Tāneatua were named the Year 7-8 winners and and with the timing of day only allowing the A/B play off, it was Apanui Aces that came out on top of the Year 5-6 grade with a 6-2 win.

The tamariki improved as the day progressed and the smiles and cheering throughout was great to see.

The Importance of Active Play

Physical Activity for Under 5s

Tips and Resources to Keep Kids Active at School