Reflecting on a Winter of Sport 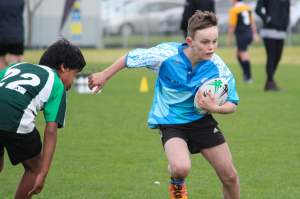 As we begin term four and look forward to the start of summer sport we can reflect on a busy winter of primary and intermediate school sporting action.

Terms two and three offered a great variety of sporting events and aside from traditional sports such as rugby, league, gymnastics and basketball there was futsal, squash, badminton, table tennis and also The Amazing Race, a team building event which proved extremely popular.

The events ranged in competitiveness from those with a participation focus through to events where school teams can qualify for regional championships or in the case of RIPPA Rugby - national tournaments.

Term two saw representatives from each school cluster compete at the Western Bay of Plenty Cross Country with the top fifteen athletes from each age group going on to qualify for the Bay of Plenty Cross Country Championship in Opotiki. The course in Opotiki is very challenging – hilly and muddy but the Western Bay students exceled, coming away with high placings across all age groups.

Participation levels at all the events has been high which shows that sport is still important to students and valued by their schools and families. A highlight this year has been the camaraderie shown between teammates and the good spirit that has been shared by students between schools at interschool competitions with handshakes and great sportsmanship noticeable at all events.

It takes many people to ensure the success of our school events; my team of helpers include an event manager and crew, teachers and sport coordinators, team managers, helpers and volunteers, parents and of course the students who are competing.

There’s a lot of organisation needed to make an event come together but the weather is one thing we can’t control. I often have schools and parents emailing and texting twenty-four hours prior to an event and making a decision on cancellation or postponement is always difficult. If it’s hosing down the decision to postpone is a lot easier but I’m often faced with those 50/50 calls. Cancellation or postponement is never taken lightly as there is a knock on effect with notifying schools, parents, event staff and then rescheduling transport and logistics. This is usually done in consultation with the sporting code and health and safety is a prime consideration.

Thanks to everyone for their participation, assistance and support during the winter months and all the best for term four.