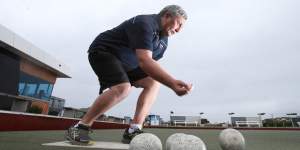 Getting the word out will hopefully lead to greater participation in the second Blind Sports Festival to be hosted in Tauranga this weekend.

''We did it once last year and it was the first time we'd done it and we struggled to get the word out there so there wasn't all that many people present,'' said Bay of Plenty Blind Sports Club president Steph Jobson. ''But we've had a few more people interested this year.''

As with last year's festival, there will be three sports played: football, bowls, cricket. Unlike last year, when the bowls were indoors, lawn bowls will be played at Club Mount Maunganui. There will be directors on hand to coach and guide the competitors.

Ms Jobson said there is a core group of members who will have go at all three sports, and others who might try just one.

''Traditionally, the cricket is more popular, but the blind bowls; we've had a lot of people keen to give that a go.

''And Blind Sport New Zealand are in behind the football this year so we've got the proper equipment and proper rules and we really want to get that one up and going because it will be quite good for young people.''