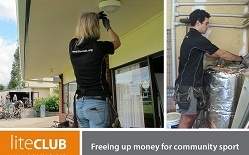 Bay of Plenty sports clubs are set to save money and reduce environmental impact on the region.

Project Litefoot is led by 10 New Zealand sporting identities, including Bay of Plenty BMX rider Sarah Walker, who have been leading by example, making changes in their own lives to reduce environmental impact.

LiteClub is a free service which helps community sports clubs follow the lead of these top sportspeople.

Electricity, water and waste are the three areas where LiteClub improves efficiency. The goal is to reduce running costs, which frees up money to go back into what really matters - sport.

By being more efficient with resources, the club has less of an impact on the environment too. It truly is a ‘win-win,' not a common sporting result.

During a 2-3 hour clubroom visit, LiteClub assesses opportunities for improvements and then makes them on the spot too, transforming the club into an efficiency champion.

Since April this year, 20 Bay of Plenty clubs have benefited from LiteClub's service. The clubroom changes made are calculated to free up $129,522 and prevent 54 tonnes of carbon emissions.

Thirty eight recycling stations were also set up in clubrooms, to make it easier and more effective for volunteers to divert waste away from landfills.