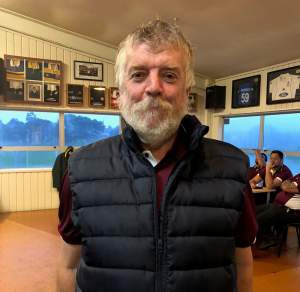 Every rugby club has fans, but there are few more dedicated than Owen Sircombe.

For the past 40 years Sircombe has been a fixture on the sidelines at the Ngongotahā Rugby Club and last weekend the club helped him celebrate his 60th birthday in style.

The club arranged for him to carry the ball on to the field at the start of the premier match between Ngongotahā and Whakatāne Marist. During the post match function he was presented with a birthday cake and his own Ngongotahā rugby jersey.

The Ngongotahā players did their part on the field too, picking up a 54-7 win.

Club president Rob Beckett said Sircombe was a dedicated volunteer to the club.

"Owen has served the Ngongotahā Sports and Community Association for 40 consecutive years as a volunteer, filling water bottles during practices and games, meeting teams and officials as they arrive at our home venue and showing them to their changing rooms.

"He sets up the rugby field goal pads, flags and spectator barriers, carries the game gear and collects them after matches. He is also known to give advice to the players and referee during and after each game," Beckett said.

Sircombe also helps out around the clubrooms with stocking the bar and washing up. He is an athlete in his own right too having won gold medals for ten pin bowling and soccer at Special Olympics events.

"He is very passionate about Ngongotahā rugby and attends all home and away games travelling with the rugby teams in the bus or vans. He is well known throughout the Rotorua rugby community and articulates his thoughts to anyone who will listen," he said.

Sircombe was over the moon with the way the club celebrated his big day.

"I was very proud [to carry the ball on to the field]. The shirt was a bit of a shock because I'm on the committee, so I'm not sure how they kept it quiet without me knowing. I think they must've talked about it when I went to get a beer," Sircombe said.

When he moved to the area 40 years ago he was working Monday to Friday and wanted something to do at the weekends. He went along to watch Ngongotahā play and that was it.

"I think we're going well this season, the team is proud of what they've done this season. I do talk to the players sometimes, I just say 'come on boys' and if they drop the ball I tell them to hold on to it more. I try not to say too much.