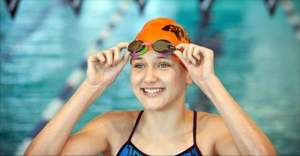 Zyleika Pratt-Smith is unlikely to forget five days in the pool last week.

The 12-year-old from the Papamoa Swimming Club and Mount Maunganui Intermediate was the shining light in her age group at the Bay Short Course Championships and AIMS Games held at Baywave.

Back in the pool the next day, Zyleika took on the best swimmers throughout New Zealand at AIMS Games and left them in her wake.

She was awarded the title for the best 12-year-old girl after winning seven individual and two team medals, with the bonus of two AIMS Games records in the 100m and 200m IM.

Zyleika said she had planned to set some records at the Bay Short Course meeting.

"I had my mind set on the records because I really wanted to get them. In the 50 and 100 free I was so close to getting those as well," she said.

"I was positive because I always have a positive mind-set.