One Crucial Hurdle to Clear Until Rio 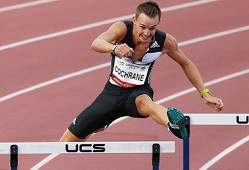 Michael Cochrane is confident he will still qualify for the Rio Olympics in one of the most physically demanding track and field event of all - the 400m hurdles. The 24 year-old former Bethlehem College student talks to PETER WHITE from Europe about the ups and downs of his career so far and why the 400m hurdles is arguably the most intense physical event of all.

How close are you to qualifying for Rio?

The way the qualifying system works is by standards. In order for me to be 100 per cent secured a spot in Rio I need to run the standard of 49.40 seconds. My current time and NZ record is 49.58s. In the 400m hurdles that is nothing. So I am very close to getting the standard.

However there is another way in. The IAAF wants 40 people in the 400m hurdles so if I am ranked in the top 40 in the world on July 11 then I also get to go, even if I don't have the standard.

Last year you competed in Beijing at the Olympic venue. How good was that?

It was an absolute high competing in the Birds Nest in Beijing at the 2015 IAAF World Championships against the best athletes in the world and in front of an unbelievably big crowd. This was where I ran my New Zealand record.

A successful European tour last year was also a high. It isn't easy competing at your best in such an unfamiliar environment with so many new variables but I managed to run fast, win races and have a great build-up for the worlds.

There haven't been too many lows as of yet, funding has been difficult to come by which is a slight setback. But in terms of training and competing, it has all been on the up.