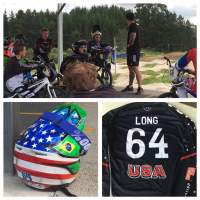 Kurt Pickard returned home to Tauranga to host a two-day development camp over the weekend for some of the best young BMX riders in the North Island.

The London Olympian is now focused on his coaching career and is employed by some of the top riders in the world, including world No3 Nic Long from USA, who performed well at the Rio Olympics, and world junior champion Maynard Peel from Auckland

Pickard, 25, was pleased to be able to give back to the sport where it all began for him and bring Long with him.

"We were originally teammates. I stopped riding and took over more of a coaching role. I had to bring him here for the opportunity," Pickard said.

"With the kids here, we cover everything from how to warm up properly to technical aspects on the track and just being around so they can ask questions.

Click here to read the full story and watch the video