Octo Trio are Young at Heart on Court 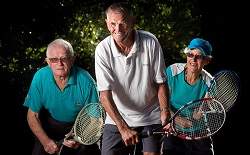 Novak Djokovic, Roger Federer and Serena Williams might all be on the top of their game, but they are not the only ones perfecting their ball skills.

Petley has embraced his eldest member badge with pride and was recently awarded Personality of the Year by the Rotorua club.

Tennis has always been a part of Petley's life. He started playing in 1935, aged 7, and the spirited player has no plans to hang up his racket despite having had two hip and knee operations.

"I loved the game from the very first time I picked up the racket and I'll be playing until I drop dead.

"I'm as competitive as ever and won't give up in a game without a fight and I think that competitive edge has kept me wanting to turn up every week.

"I'm a great believer in exercise: I played loads of different sports growing up, like wrestling, and keeping moving is even more important now.

"Age shouldn't come into it.

"I tell everyone, regardless of their age, to just keep moving and have a go at doing something."

Petley plays twice a week at the club, and competes in the veterans' league, where anyone over the age of 35 is eligible.