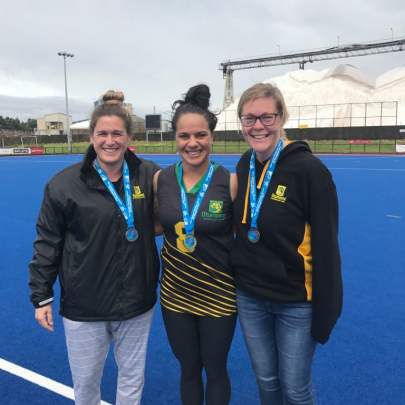 Meet Seelan Ramiah - newly crowned New Zealand's fastest teacher over 50. Mr Ramiah is one of about 600 teachers from throughout the country in Tauranga taking part in the inaugural New Zealand Teachers' Games 2017.

Mr Ramiah, a physical education teacher at James Cook High School in South Auckland, won the 50 to 59 age group in the Fastest Teacher race - the first event of the games. The event hosts competitions in several sporting codes including bowls, running and dodgeball.

"I think the idea behind the teacher games is getting people to meet and create new relationships. It's a fun day," Mr Ramiah said.

Although the atmosphere was friendly and fun, Mr Ramiah said he wanted to set an example to his students.

"I'm always trying to get them into new things and to get them involved. I've spoken with a few other teachers who feel the same way. If we can do this and try something new, we set a good example for the kids to learn from. And they have really gotten on board as well. At my school, everybody was wishing me well."

"A lot of teachers stop playing organised sport and we wanted to re-engage them and the things sport has to offer. It's really about getting them into a sport and giving that back to the kids."

Mr Carnachan said the event was partly inspired by a similar event held in Australia.

Mr Carnachan said organisers chose Tauranga because they wanted the event to be near Auckland "but not in Auckland". The climate, good reputation of Sport Bay of Plenty and sporting facilities available at Blake Park were also deciding factors.

Sport Bay of Plenty's Sport Manager Megan Cleverley said a lot of families involved also chose to spend their school holidays in Tauranga, which was great for the local economy.

"From my perspective, it's also nice to see teachers doing something for themselves, because they often gave so much of themselves to their students, job or community they don't really get to take part in something like this," she said.

The event offer medals to all winners but also professional development for some teachers trying some sports for the first time, she said.